Our First Episode Will Be Rated ARRRRRRRR!

We know the fall semester may seem like a world away, but Scholars & Shots is already champing at the bit to get started! Our minds have been fairly blown and our humors humbled by the incredible cast of talented characters who have agreed to grace our show.

From lumberjacks to torture, from fascists to maps and a dozen other things in between, the research we’ll discuss covers some bases we didn’t even know existed! And nothing excites Team S&S more than arming ourselves with a slew of new factoids we can bust out in completely inapropos moments.

Have your rum at the ready for our inaugural episode, in which Dr. Jamie Goodall will tell us all about the swashbuckling picaroons who helped shape tastemaking and consumerism over the early modern Atlantic. Pirates – they’re more than just marauders, you know!

And while we’re on the topic of people who take things that aren’t theirs, we'll talk with Dr. Ian Saxine about the Anglophone colonizers’ misguided theories on landownership, and what the Wabanaki Indians had to say about all that.

There’s so much to unpack, and that’s just Episode One! We just feel so darn lucky to get to pick these researchers’ brains, and we hope you’ll join us in our…er…intoxicating enthusiasm at rolling out such a fun and interactive new project!

Listen to our Promo for Season 1 of Scholars & Shots!

Click here to listen to our new teaser on BuzzSprout!

Where it All Began: The Process of Building a Podcast for Drunk Academics 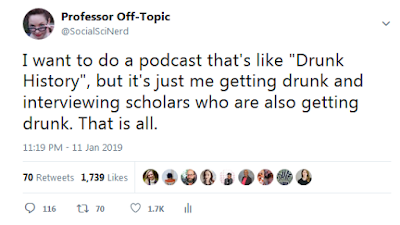 Within moments, my twitter feed blew up. There were tons of likes, RTs, and responses from people who desperately wanted this to be a thing, and/or desperately wanted to be involved. So, because I'd had a couple glasses of wine, Drunk Me decided to do this thing: 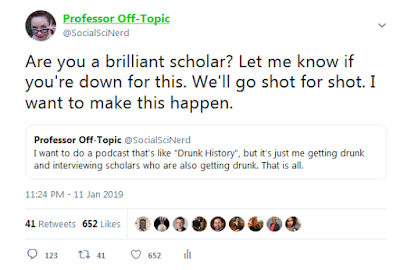 In just five days, these tweets have been seen by over 200,000 people. I got dozens of DMs from people who were interested in getting involved. It's been a tad overwhelming, but it's pretty clear that there is a podcast need that MUST be fulfilled.

In spite of the fact that I'm woefully unfunny, am not particularly clever, and suck at small-talk, I thought, WHY NOT? What I lack in snappy comebacks, I hope I can make up for with my genuine over-excitement over all stuff nerdy, my (distant) background as a radio DJ...oh, and my exceptional tolerance for alcohol!

Monday morning, I picked a name, set up a blog, got a new twitter feed, created an "Application Form", and even wrote a Podcast Release for my future guests to sign. I tweeted out the information, set a tentative release date for Fall Semester, then went to class and lectured for a few hours.

I didn't expect things to get popular so quickly, and I really didn't expect to see such brilliant academic rock stars offer to be on my show! I've got 11 SPECTACULAR applicants, and I still don't know what I'm doing yet! Case in point: I accidentally tried to steal another podcast's name, resulting in my brand new podcast twitter account getting blocked. Whoops!

So, for now, I'm going to go with the working title of "Scholars & Scotch"; although I would like a less booze-specific title in the future. And because I'm not good at anything but being open and transparent, I figured that I would blog the process of building a podcast, as experienced by someone who doesn't know what they're doing (i.e., ME).